Oil tanker owners face spiraling insurance costs to load cargoes from the world’s largest crude-export region after the latest round of attacks on vessels.

War risk premiums that owners pay each time they go to the Persian Gulf have now surged to at least $185,000 for supertankers, according to people with knowledge of the market. They rose to $50,000 after the attacks a month ago.

Both owners and the companies that charter their ships paused bookings in the immediate aftermath of attacks on Thursday as they re-evaluated risks to shipping barrels from the Middle East in the wake of attacks on two more tankers just a month after similar incidents. Insurance costs from the Persian Gulf are soaring.

The U.S. pointed the finger at Iran for the attacks just outside the Strait of Hormuz, a vital corridor for crude oil exports. The Persian Gulf country immediately denied being responsible. Regardless, six tankers, hauling a variety of petroleum cargoes, have now been targeted in the space of just 32 days — the kind of threat to merchant shipping that hasn’t been seen in the region for decades. 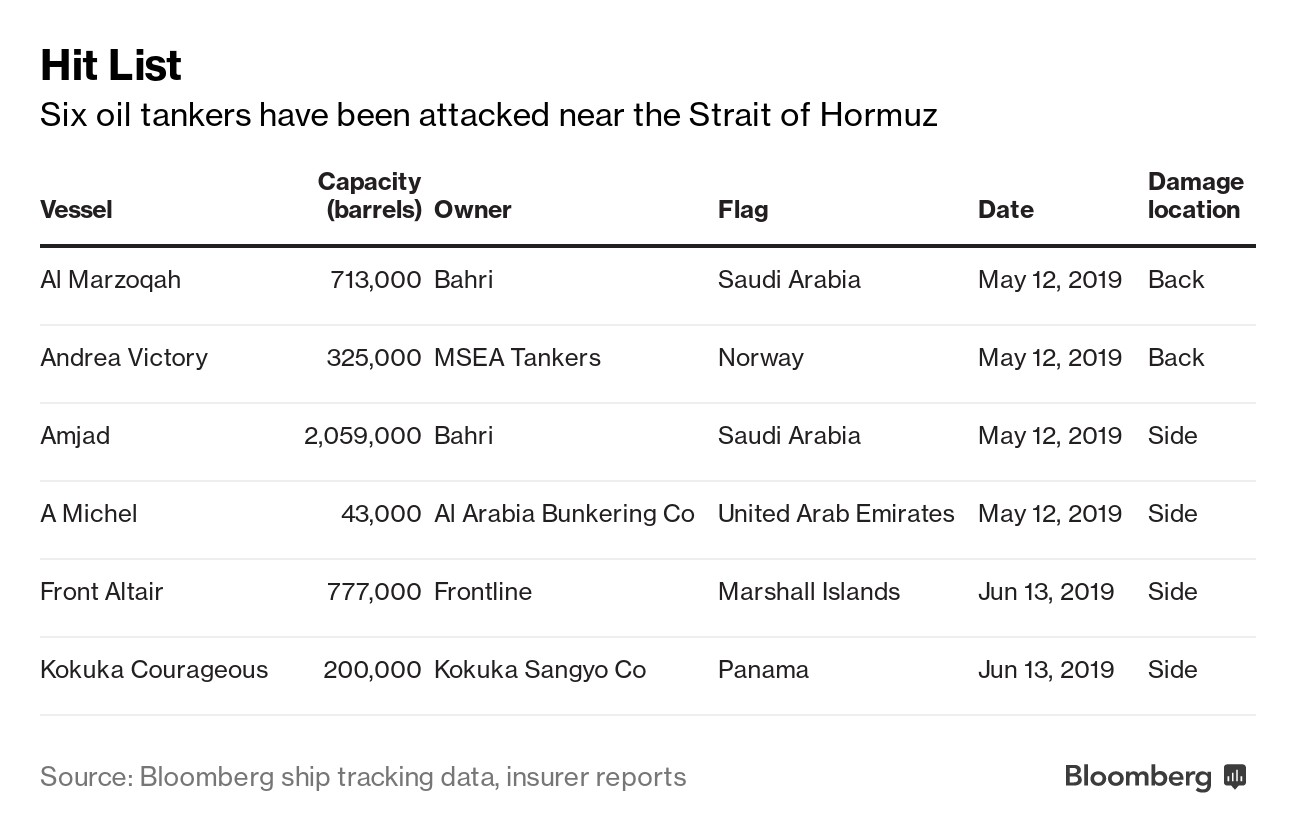 “We need to remember that some 30% of the world’s crude oil passes through the Straits,” said Paolo d’Amico, chairman of Intertanko, the biggest trade group for tanker owners. “If the waters are becoming unsafe, the supply to the entire Western world could be at risk.”

The Joint War Committee, a group that advises insurers, designated the entire Persian Gulf and waters just outside it a so-called Listed Area after the incidents a month ago. The classification gives underwriters room to charge more. As of Thursday, owners were reluctant to send vessels to the region while there was also a dearth of cargoes, according to traders and shipbrokers involved in that market, who spoke on condition of anonymity.

DNK, the mutual insurer that covered one of the ships damaged Thursday, will increase its rates for war insurance, according to a person familiar with the matter. Rival insurer Hellenic War Risks Club will probably increase a so-called additional premium that owners pay when sailing to the Persian Gulf with immediate effect, according to a notice on its website.

DNK insured the Norwegian-owned Front Altair for the full value of the vessel, according to the person familiar with the matter. A ship of that tanker’s size is worth between $30 million and $50 million, according to another person with knowledge of the matter. Insurers provide war policies that pay out the value of ships damaged or destroyed by acts of both terrorism and war. The Front Altair’s cargo of naphtha would be insured under a separate policy.

The vessel is being towed away from Iranian waters, and the company’s owner is considering transferring the naphtha to another ship.

Some owners appear to be “taking a breather” when it comes to accepting charters from the Middle East while they evaluate the risks of lifting oil from the region, according to Halvor Ellefsen, a shipbroker at Fearnleys in London.

Shipping companies should consider diverting vessels from the area where the two vessels were attacked Thursday, industry group BIMCO, the largest international shipping association for owners, said in a security advisory to its members. Tensions in the Strait and the Gulf are now at the highest they can be without an actual armed conflict, the group said in a separate statement.

Japan’s Mitsui OSK Lines Ltd. has ordered ships it operates in the area to keep a 12-mile radius from the zone where the two tankers were attacked, a company spokesman said on Thursday evening.

Intertanko said it is “extremely worried” about the safety of crews in the region. It also said two of its members suffered explosions at or below the water line in what the group described as an attack.

The crew of the Front Altair was forced to board an Iranian vessel and then taken to Iran, according to a report from DNK seen by Bloomberg. Despite having already been picked up by a merchant ship nearby, Iran’s navy “demanded that the crew were transferred to them,” the report said.

Escalations that materially disrupt Middle East oil supplies are relatively rare. The Iran-Iraq war coincided with a big slump in OPEC oil output in the first half of the 1980s. That conflict saw tankers destroyed as the two countries tried to damage one another’s economies.

By contrast, Iraq’s 1990 invasion of Kuwait, and the Gulf War that followed, were a long way from Hormuz and had a relatively small impact on flows through the Strait, with Saudi Arabia replacing much of the lost Iraqi and Kuwaiti crude.

In the short term the rates for chartering ships in the Middle East could rise as some owners consider avoiding the region, lowering supply, JPMorgan Chase & Co. analyst Noah Parquette wrote in a report.

Shares of tanker companies responded bullishly, suggesting a view among some investors that the tensions could drive up freight rates. Frontline Ltd. — the owner of the Front Altair — led the way, rallying as much as 11% in Oslo on Thursday.