Theresa May to lead emergency meeting on Persian Gulf security

Prime Minister Theresa May will lead a meeting of the U.K. government’s emergency committee on Monday to discuss the security of shipping in the Persian Gulf after Iran seized a British oil tanker in the Strait of Hormuz last week.

May and the committee of top officials and ministers, dubbed Cobra, is to meet at 10:30 a.m. in London, her office said. The U.K. has demanded the immediate release of the Stena Impero and over the weekend summoned Iran’s charge d’affaires in London, Mohsen Omidzamani, following the incident in one of the world’s critical energy chokepoints. While the government threatened Iran with “serious consequences” and advised U.K. ships to avoid the area, ministers on Sunday sought to dial down the rhetoric.

“We need to try and de-escalate this,” Defense Minister Tobias Ellwood said in a Sky News interview. “Our first and most important responsibility is to make sure that we get a solution to the issue to do with the current ship, make sure other British-flagged ships are safe to operate in these waters and then look at the wider picture of actually having a working proper professional relationship with Iran.”

On Sunday, the Iranian flag was seen flying over the bridge of the British tanker in the Bandar Abbas port, according to images aired by state-run Press TV.

Tensions have been flaring in the Strait of Hormuz in recent weeks as Iran lashes out against U.S. sanctions that are crippling its oil exports and after the seizure of one of its tankers near Gibraltar. The Strait accounts for about a third of the world’s seaborne oil flows, and Brent crude rallied as much as 2.4% on Friday’s news.

The U.K. plans to take further measures this week, Foreign Secretary Jeremy Hunt said in a statement, without giving details.

The Sunday Telegraph said diplomatic and economic measures, including a freeze on Iranian assets, are being considered and the U.K. may push the European Union and United Nations to reimpose sanctions on Iran. But on Sunday, Chancellor of the Exchequer Philip Hammond sought to downplay that threat.

“We’ve already got a wide raft of sanctions against Iran, particularly financial sanctions, so it’s not clear that there are immediate additional things that we can do but we are of course looking at all the options,” Hammond said in a BBC interview. Still, “it was an illegal act and we’re going to pursue every possible diplomatic route to resolve this issue.”

Iran doesn’t have any assets that the British government could seize, according to Ali Naghi Seyyed-Khamoushi, head of the Iran-Britain Joint Chamber of Commerce in Tehran. Any sanctions wouldn’t affect Iran’s exports and imports to any great extent, he said, according Iran’s Tasnim news agency. 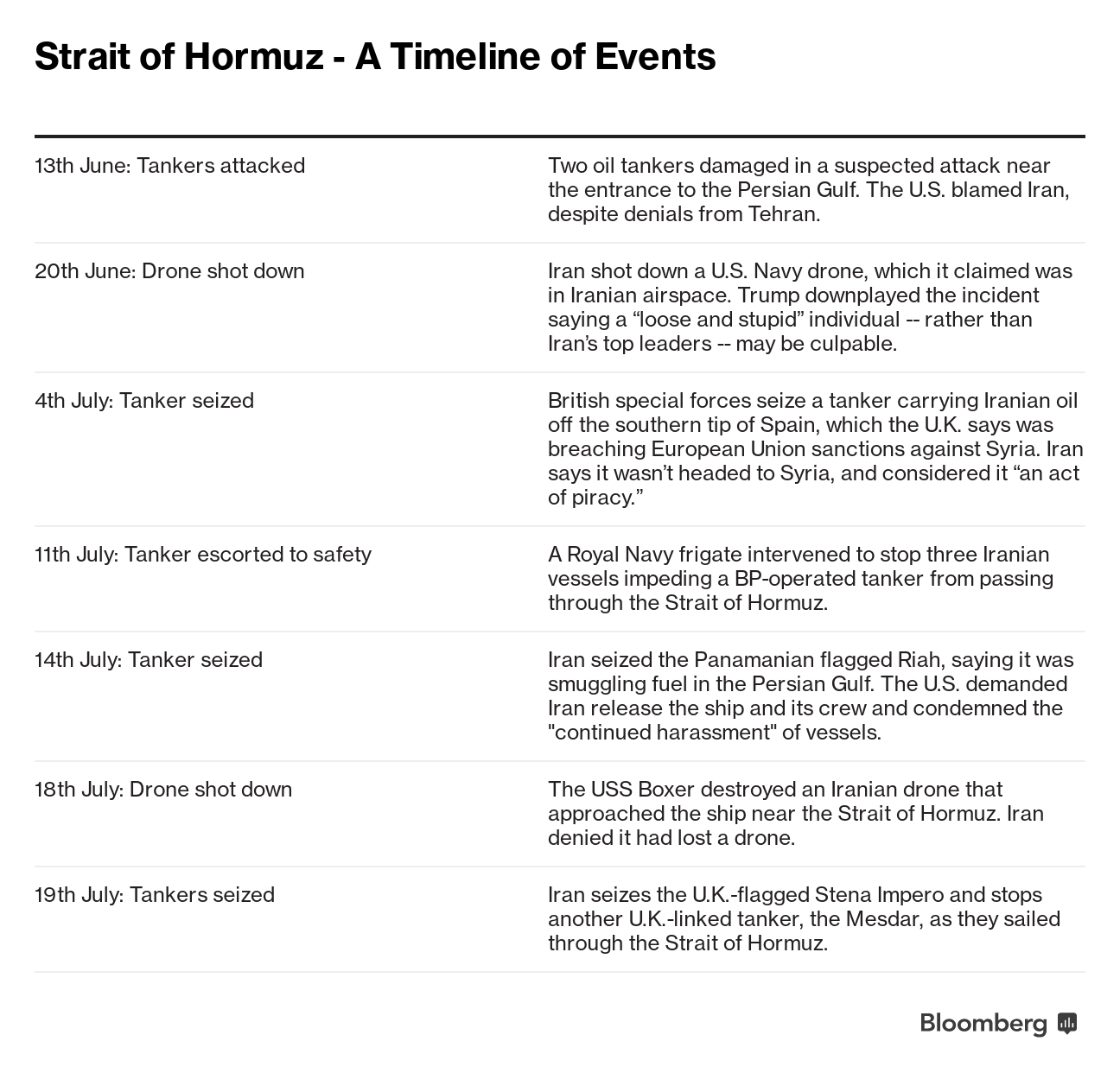 With May set to leave office on Wednesday, the latest clash with Iran presents a diplomatic headache for her successor. The favorite to be named the new Conservative Party leader is Boris Johnson, and his opponent, Hunt, on Saturday tweeted that that British shipping will be protected in the Persian Gulf.

U.S. Central Command has announced a “multinational maritime effort” called Operation Sentinel to “increase surveillance of and security in key waterways in the Middle East to ensure freedom of navigation in light of recent events in the Arabian Gulf region.”

Relations between Iran and the West have worsened since U.S. President Donald Trump pulled out of the 2015 multi-nation agreement with Iran to limit its nuclear program. The U.S. reimposed the sanctions that had hobbled the Iranian economy and has been pressuring European allies to respect the sanctions and curtail their trade with Iran.

Iran’s Revolutionary Guards said on Saturday that the British ship entered the strait from the wrong direction, wasn’t paying heed to maritime regulations and could potentially have collided with other vessels. State television said the ship will be held until judicial assessments are complete.

Stena Bulk, the ship’s owner, said on Sunday that a request to the authorities at Bandar Abbas — where the vessel is anchored — to visit the 23 crew members had been acknowledged. The company hasn’t yet received a formal response.

The firm said on Saturday it had been told that the crew members are in good health. It has been given no instructions about the fate of the ship.

Iran has also suggested its actions are in retaliation for Britain’s seizure of the Grace 1 tanker off Gibraltar. A court in Gibraltar ordered the continued detention of the vessel for another 30 days, after it was held on suspicion of taking oil to Syria. Iran denies that was the destination.

In recent weeks the U.K. Navy has escorted some tankers out of the region, while the U.S. said it downed an Iranian drone just days ago. The latest incident cooled hopes that the U.S. and Iran would soothe tensions by entering into negotiations.

In Washington, Trump said he will be “working with the U.K.” and suggested the latest developments justify his harsher approach toward Tehran. “This only goes to show what I’m saying about Iran: trouble, nothing but trouble.”