Opposition parties have again hit out at the Scottish National Party (SNP) for wrongly claiming it has “banned fracking” in Scotland.

The SNP posted on Twitter on Wednesday that it had “already banned fracking” in Scotland in response to a debate on the issue in the UK Parliament.

But a judge announced last year that that there is currently “no ban in place” north of the border.

The Scottish Government last night admitted that there is no current fracking ban, but that a “moratorium” exists to stop the practice.

A spokeswoman for the government added that Scottish Ministers were “entering the final stages” of policy making on the issue.

One Scottish Conservative accused the SNP of “taking the public for fools” by insisting a ban is currently in place in Scotland, while the Scottish Greens also criticised the post.

Fracking firm Ineos sought a judicial review in 2018 claiming the Scottish Government had “unlawfully imposed an indefinite ban” in Scotland.

In his judgement, Lord Pentland said the Scottish Government had “repeatedly stated” that it had introduced a “effective and robust ban”, but that it was “mistaken” that its assumed policy was legal. 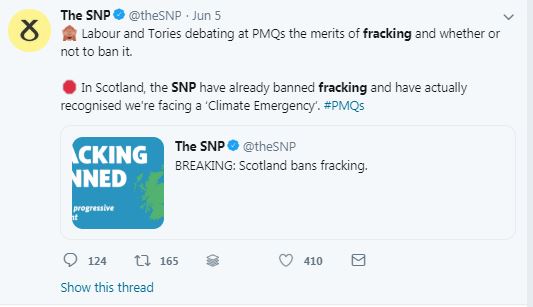 Alexander Burnett, Scottish Conservative shadow minister for business, innovation and energy, said:  “An SNP government lawyer was sent to the Court of Session last year to argue that no such ban is in place.

“It defies credibility for the party now to claim otherwise. And it does nothing for the reputation of Nicola Sturgeon’s government in the eyes of major industry players like Ineos.”

A spokeswoman for the Scottish Government said: “The preferred policy position is subject to a statutory Strategic Environmental Assessment and other assessments before any policy can be adopted.

“In the meantime, it is important to stress that, under the terms of the moratorium, no local authority can grant planning permission for any proposed fracking or coal bed methane project without advising Ministers, which then permits Ministers to call the application in and Scottish Ministers would defer any decision on any planning application that did come forward until the policymaking process on their preferred position is completed.

“The practical effect of the current moratorium, and the policymaking process which is underway to finalise our position, is that no fracking or other UOG activity can take place in Scotland at this time.”