The US said on Monday that it won’t extend the sanctions waivers for eight countries importing crude oil from Iran. The move could remove around 1.1 million barrels per day from the market.

Although Rystad Energy anticipated a further tightening of sanctions, the details in the announcement have led us to revise our forecast downward for Iranian crude production.

Rystad Energy forecasts that production will drop to 2.27 million bpd for the second half of 2019, reaching this level by July 2019, which equates to a drop of 0.43 million barrels per day (bpd) from current March 2019 levels.

The net effect for the oil market is bullish, as the market will lose more supply from Iran, mostly of medium-sour and heavy-sour quality.

“However, Saudi Arabia and several of its allies have more replacement barrels than what would be lost from Iranian exports in a worst case scenario. This should limit the positive impact on crude prices,” says Rystad Energy Head of Oil Market Research, Bjørnar Tonhaugen.

“Since October 2018, Saudi Arabia, Russia, the UAE, and Iraq have cut 1.3 million bpd, which is more than enough to compensate for the additional loss. However, realistic spare capacity will be cut significantly, reducing room for error in Libya, Nigeria, and Venezuela,” Tonhaugen added. 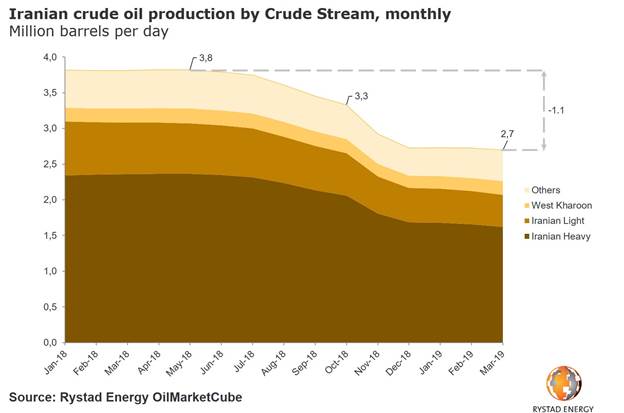 Rystad Energy, the independent energy research and consultancy in Norway with offices across the globe, says that Iranian crude exports have dropped from around 2.5 million bpd in April 2018 to around 1.1 million bpd currently.

“In our new base case, we no longer expect India to buy Iranian oil after May 2019, and now only expect China and Turkey to continue purchasing Iranian cargoes. We lower our Iranian crude exports estimate from 900,000 bpd to 600,000 bpd from May 2019 onwards, allocating around 500,000 bpd of exports to China and the remainder to Turkey,” Tonhaugen remarked.

The density and sulfur content of the main crude grades exported by the “four cutters” –  Saudi Arabia, UAE, Iraq and Russia – are of similar quality to Iran’s main export grades, Iranian Heavy and Iranian Light.

“Saudi Arabia, Russia, the UAE, and Iraq will have no problem replacing Iran’s crude grades, such as Iranian Heavy, Iranian Light, and West Kharoon,” Tonhaugen said. “We believe that Saudi Arabia has ample capacity of Arab Light especially, which is a grade of similar quality to Iranian crudes, due to the current production cuts. Russian Urals and Iraq’s Basra Light is also comparable to Iranian crude quality, while UAE’s main export grades are somewhat lighter and sweeter than Iran’s.” 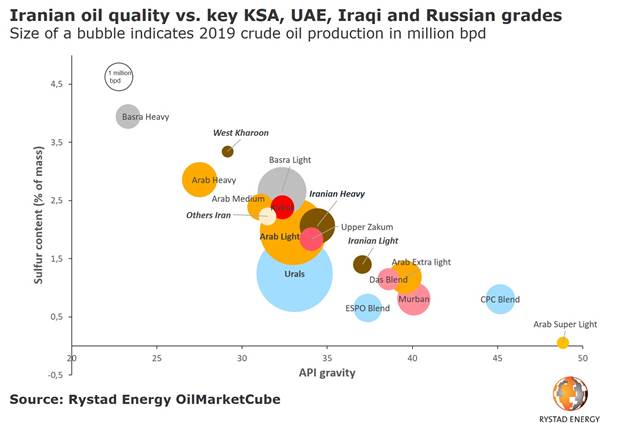