After several years in the doldrums, oilfield service companies are beginning to raise prices for their products and services, according to Rystad Energy.

Audun Martinsen, head of oilfield service research at Rystad Energy, said: “Oil and gas investments are on the rise, and so too is the pricing power of service companies.

“After losing pricing power in 2015 and 2016, oilfield service companies have since regained some of the lost ground, thanks first and foremost to industry consolidation among players that has concentrated the market over the past couple of years.

“Pricing power is likely to be further strengthened within the service industry, as orders are anticipated to rise across the supply chain, coupled with capacity adjustments intend to avoid oversupply in 2019 and 2020.” 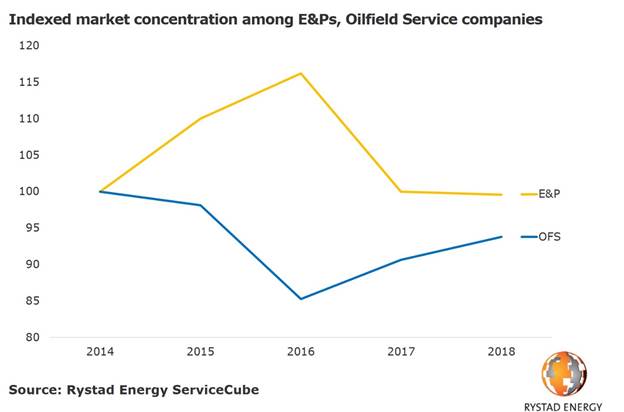 A recent Rystad Energy deep-dive on market concentration within the oil and gas industry can be used to understand key pricing power drivers affecting the beleaguered service industry.

Many oil and gas companies cut back on investments in 2015 as oil prices plummeted. Some larger and financially stronger E&P companies bucked the trend.

Many smaller players were forced to cut costs. As a result, service companies’ client universe shrank.

Martinsen said: “This trend continued in 2016, but in 2017 and 2018 more E&Ps could finally finance their ambitious operations growth through improved operational cash flow, leaving market concentration levels in 2018 on par with those seen back in 2014.”

Service companies became more fragmented in 2015 and 2016, an insight that becomes apparent when indexing various service company size-classes to examine their evolution since the first quarter of 2014. 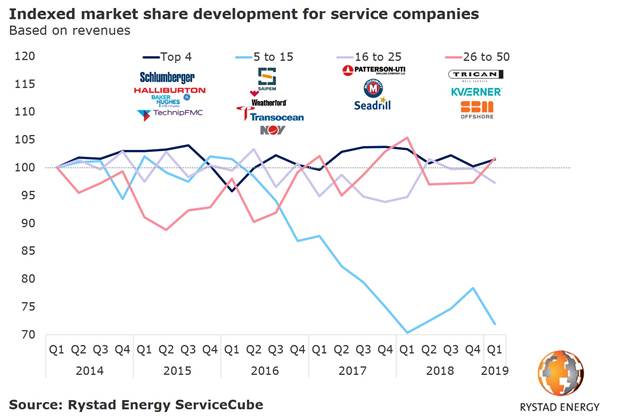 This analysis shows that both the Big Four companies — Schlumberger, Halliburton, BHGE, and TechnipFMC – and the next 10 largest service companies out-grew the other service companies until the fourth quarter of 2015, at which point they began to lose market share to smaller players.

In 2017 and 2018, market concentration was lifted by several major M&A deals in the industry.

Martinsen said: “Even though the oilfield service market has become more concentrated at the same time as the buyer side has become more fragmented, there are also other factors which impact pricing power.

“Some segments, despite being more concentrated, are still heavily challenged by oversupply, forcing companies to adjust their capacity before prices improves.”