Oil and gas supply chain firms are among a large number of Scottish companies showing “zombie-like” symptoms, KPMG has said.

The professional services firm said the sector had been dented by a reduction in the number of capital projects in the North Sea, as well as cost and pricing pressures.

KPMG said this combination had made it difficult for supply chain firms to mount a sustained recovery, despite a market improvement in oil prices.

The company made the observations in a new report showing 9% of private Scottish companies were “zombies” — companies under sustained financial strain, compared to 8% nationally.

KPMG said the oilfield service sector’s plight was reflected by the high number of mining and extraction zombie firms. 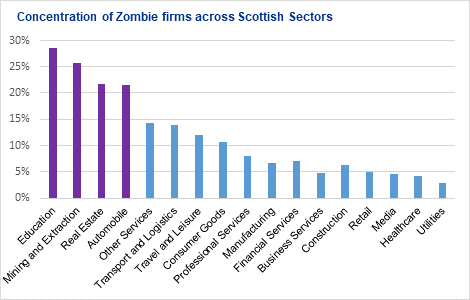 Blair Nimmo, head of restructuring at KPMG in the UK, commented: “For the past decade, zombies have been allowed to sleep walk largely undisturbed, thanks to an extraordinary monetary and political environment, coupled with lenders exhibiting greater creditor forbearance to struggling companies in their portfolios.

“The uncomfortable truth, however, is this environment is unlikely to persist indefinitely. In the event of a liquidity squeeze, many of these underperforming businesses would fail – and if this happens, the potential for contagion is very real, creating broader challenges for an economy already struggling to deal with a plethora of issues.

“The good news is that prognosis doesn’t have to be terminal – but, as with many things in life, acting sooner rather than later provides more options and can improve the chances of recovery.

“Urgent dialogue is required between regulators, banks and businesses in order to minimise the ongoing drag these companies have on the economy, and to mitigate against potential risks in the event of an economic downturn.”

Across the UK, of the circa 21,000 private companies that KPMG analysed, 60% display one or more of the symptoms associated with zombies, while just 8% display three or more.