New wave of UK project sanctions out to 2022, Rystad predicts

The UK offshore scene is poised for a timely comeback, according to energy consultancy Rystad.

A new wave of UK field development projects is expected to be sanctioned towards 2022.

The independent energy research and consulting firm forecasts that final investment decisions (FIDs) could be reached on as many as 38 new UK offshore projects over the next three years, representing $22.6 billion in greenfield expenditure if UK prospective resources live up to expectations.

“If operators’ plans play out as intended, the 38 potential project commitments expected over the next three years will provide fertile ground for contractors, and a quick look at successful UK North Sea service companies from the recent past sheds some light on who may capture this growth in the near future,” says Audun Martinsen, head of oilfield services research at Rystad Energy.

TechnipFMC has been the top service provider in the UK market in recent years, measured in revenues, followed by Wood and Schlumberger. 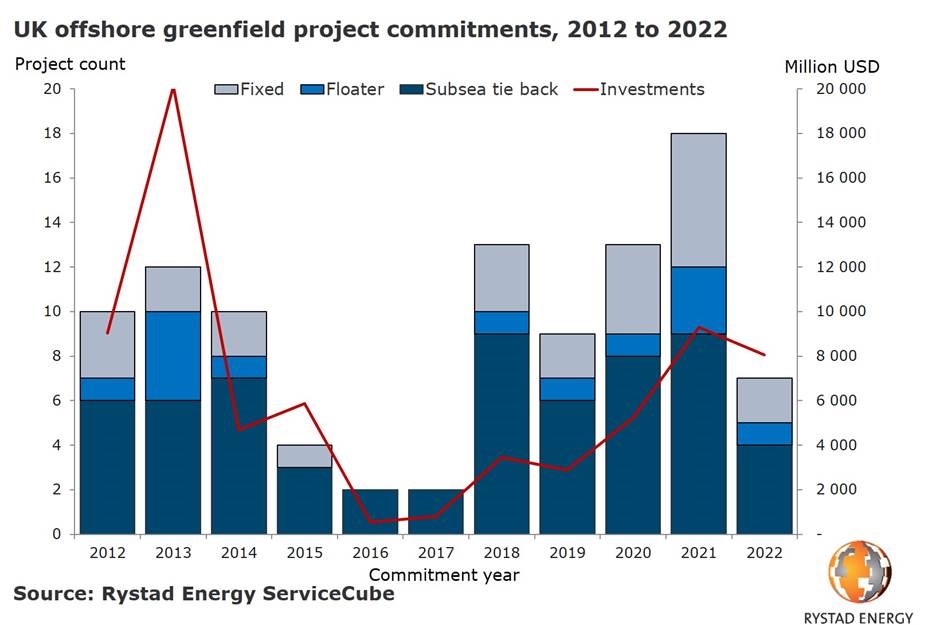 With project sanctioning forecast to accelerate in the UK, Rystad Energy expects the EPCI market – engineering, procurement, construction and installation – to grow by 65% over the next three years, while the subsea and seismic markets are each forecast to expand by 35%. Maintenance & operations, well services & commodities, and drilling contractor purchases are each expected to grow at a more subdued rate.

“After several tough years, the sun may finally be ready to shine again on the UK offshore market,” Martinsen remarked on the opening day of Offshore Europe.

UK offshore greenfield investments were severely hit during the downturn, declining from a peak of $20 billion in 2013 to a paltry $550 million in 2016, and in turn causing oilfield service unit prices in the region to fall by 27% on average.

Rystad Energy expects the number of UK project commitments to shrink slightly this year before rising sharply in 2020 and again in 2021, when we forecast a new peak with about 18 FIDs worth a combined $9.3 billion. We expect to see far fewer projects sanctioned in 2022 – only around seven – but they include some major developments and the collective capex commitment should still be large, projected at $8 billion. 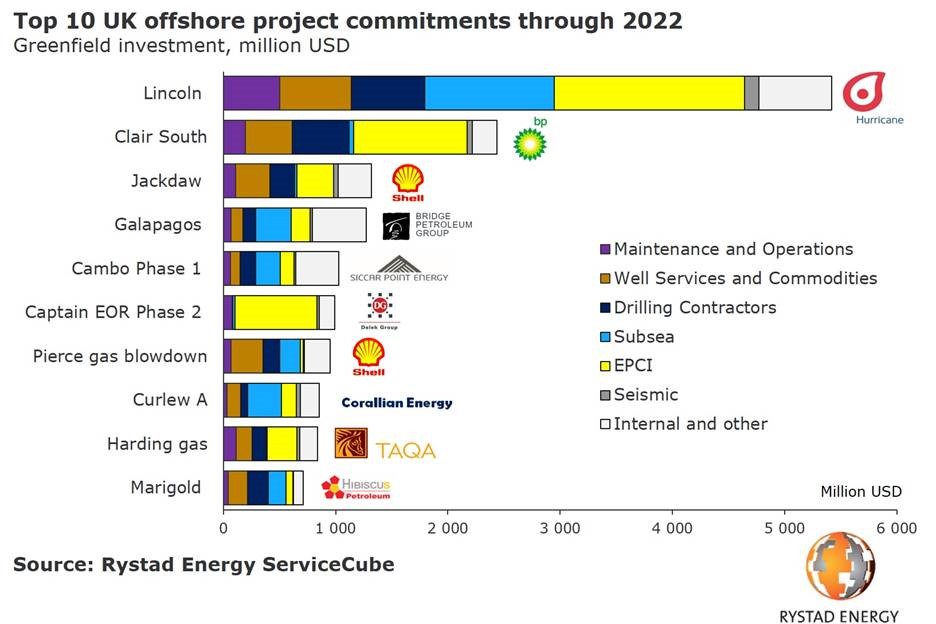 “The largest single development on the list is Hurricane’s Lincoln project, at an estimated $5.4 billion, albeit recognizing that its schedule could be hindered depending on the viability of its fractured basement reservoir,” Martinsen remarked. “The largest project likely to be sanctioned before the end of this year is the $1 billion first phase of Siccar Point’s Cambo development.”