Guyana’s anti-corruption agency is investigating how exploration rights were awarded in the world’s biggest new deepwater oil region, including those now controlled by Exxon Mobil Corp. and Tullow Oil Plc.

The probe is broad in scope and is at an early “investigatory stage,” Clive Thomas, director of the the State Assets Recovery Agency, said in an interview in the seaside capital of Georgetown last week. The Stabroek, Kaieteur and Canje blocks, all operated by Exxon, will be part of the inquiry, as well as Orinduik operated by Tullow, he said.

The investigation pits the administration of President David Granger against the previous government headed by Donald Ramotar, who left office in 2015. Neither Exxon nor Tullow have been singled out as targets of the probe or accused of any wrongdoing by authorities, and both the current government and opposition party have repeatedly said they stand by all oil contracts.

“We’re investigating the issuance of the licenses, for example, and the various blocks,” Thomas said. “We’re building up a case. This is an area of investigation into how the blocks were allocated and the decisions that were made.”

Spokesmen for Exxon and Tullow declined to comment on the probe. 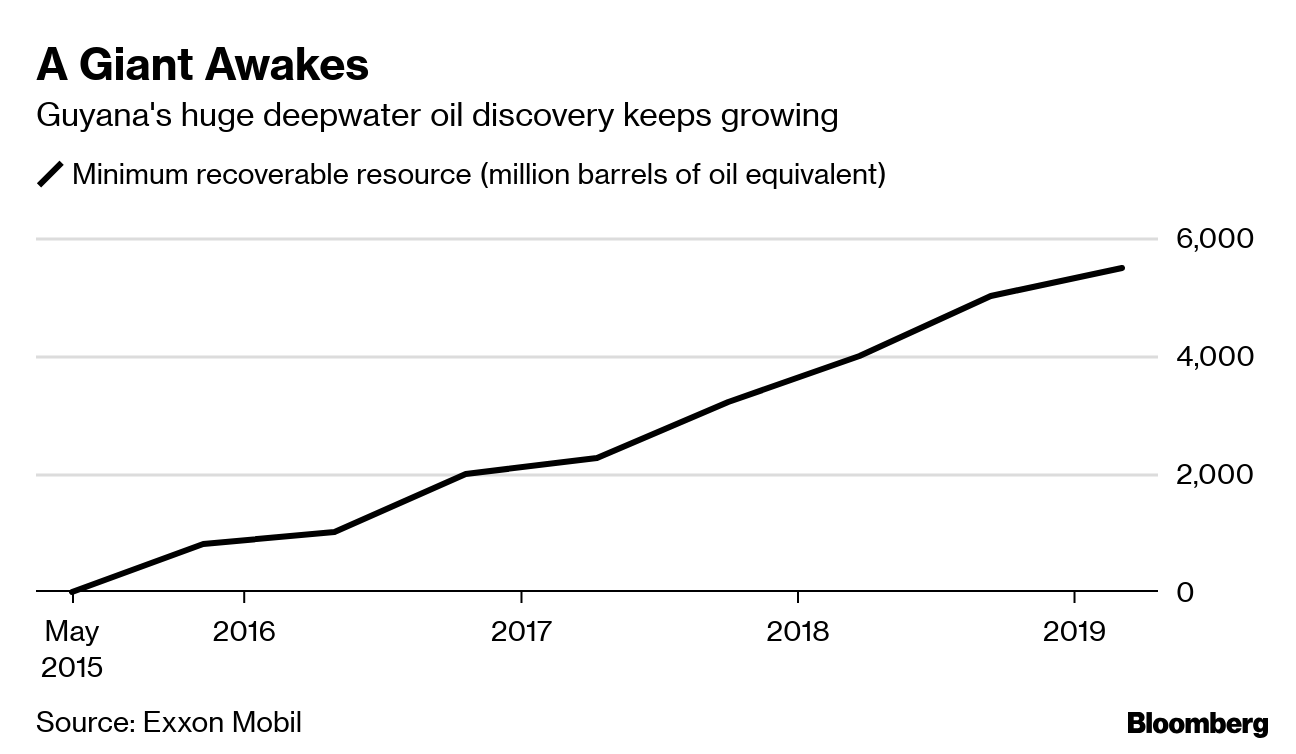 Guyana has become one of the world’s most sought-after exploration plays after Exxon struck oil off the coast of the tiny South American nation in 2015, a discovery that has since blossomed to 5.5 billion barrels. But critics including the president’s former energy adviser Jan Mangal say the country’s oil contracts were sold off too cheaply and without due process.

Guyana ranks 93rd in Transparency International’s 2018 Corruption Perceptions Index of 180 countries, on a par with Kosovo and Gambia.

“We’re at an investigatory stage so we can’t libel persons by saying that we found proof of anything,” Thomas said. But “there’s enough evidence for us to want to continue the investigation.”

All of Exxon’s discoveries have so far been made in Stabroek block, which was initially awarded in 1999 and renegotiated in 2016. Tullow also signed up to explore Orinduik in 2016.

One particular area of focus for Thomas’ team involves the 2015 election, when Canje and Kaieteur were awarded to a group of junior exploration companies. Exxon was not among the initial investors but bought stakes in both blocks a year later and became operator.

Canje and Kaieteur encompass almost 20,000 square kilometers, an area equivalent to 870 leases in the U.S. section of the Gulf of Mexico. Rights to drill the area were awarded during the final days of Ramotar’s term. Nine days after the Kaieteur lease was signed, the government announced that Exxon stuck oil in a well called Liza-1.

The timeline is significant because with the discovery, Guyana went from being a high-risk frontier with no track record of success to one of the world’s most in-demand exploration regions. The country could have commanded much better terms for the blocks had they been granted after the Liza discovery, Mangal said.

Ramotar said in an interview last month that he had some indication that Liza would be a success before it was publicly announced. In hindsight, waiting until Exxon’s results were fully disclosed would have put Guyana in a better negotiating position, he said.

“Looking back with 20/20 vision it probably wasn’t the right thing to do,”’ Ramotar said.