His base salary increased by 2.5% to £1.3m and he earned £2.6m in bonuses. The rest was largely made up of long-term incentive awards.

A quarter of investors voted against Mr van Beurden’s 2017 remuneration package at the firm’s annual general meeting in May.

The new figures were presented in the Anglo-Dutch firm’s annual report for 2018.

Shell’s financial performance was strong during the 12 months, as revenues jumped 27% to £295 billion, while pre-tax profits came to £27bn, nearly double 2017’s total.

Gerard Kleisterlee, chairman of Shell’s remuneration committee, said the company had “acted carefully in managing pay” over the course of Mr Beurden’s service.

Mr Kleisterlee also said the committee was “sensitive to the wider societal discussions” regarding the level of executive pay and spent a significant amount of time discussing the high single figure for the CEO in 2018.

He said Shell had achieved a lot under the leadership of Mr van Beurden over the last three years.

For example, it completed the acquisition of BG Group, divested £22.5bn worth of assets, made several major investment decisions and created a new energies business.

In December, Shell revealed plans to link pay for its top brass to the achievement of emissions targets.

“In terms of broader company performance, the committee recognised the strategic clarity the CEO provided around the purpose and direction of Shell,” Mr Kleisterlee said. 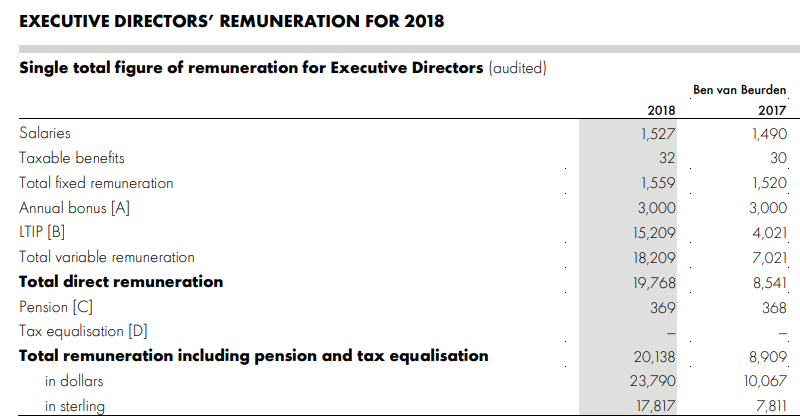 The executive directors’ remuneration report. Figures are in thousands of euros, unless stated otherwise.

For his part, Mr van Beurden said: “We delivered on our promises for the year, including completing our $30-billion divestment programme and starting up key growth projects, while maintaining discipline on capital investment.

“We paid our entire dividend in cash, further reduced our debt and launched our share buyback programme.

“But 2018 was not all good news for us. Tragically, a contractor died at our Rheinland refinery in Germany and another died at an onshore well in the USA.

“I am deeply unhappy about these incidents and call on all Shell employees, contractors and suppliers to redouble their focus on safety.”