Every few weeks, in a glass-walled office with a picture of an oil platform filling the east side, an unusual conversation takes place.

Bernard Looney, the 48-year-old who controls BP Plc’s massive oil and gas production, sits down with a 26-year-old petrophysicist, Connor Tann, to get answers to a few fundamental questions. Among the most important: How can the oil behemoth keep up with the times?

“There’s a lot of doom and gloom about the sector, and what’s happening in the world in general, and all sorts of things,” Looney said. “A lot of your days get consumed in stuff like that, and to spend an hour with Connor, where he is the best and the brightest, it’s energizing.”

Tann, who has a masters in experimental and theoretical physics from the University of Cambridge, is the picture of what Big Oil wants to become: smart, progressive and tech savvy. The industry is banking on adopting those qualities to keep it relevant throughout an “extraordinarily hard, complex” transition toward low-carbon fuels, Looney said.

He also hopes to learn from Tann the key to making BP cool. Often seen as part of an aging industry that’s set in its ways, oil companies need to show they can offer thrilling tech careers to keep recent graduates from joining start-ups or giants such as Facebook Inc., where employees rarely have offices and break rooms have ping pong tables and beer kegs.

“If we can keep people like Connor enthused, learning, growing, they’ll all tell their people: ‘Hey, it’s not an oil and gas company. It’s as much a tech company as it is anything else,”’ Looney said.

“I just couldn’t believe it. I was flabbergasted”

The lack of skilled workers, along with increased competition and crude oil prices, was a top concern for oil executives in a survey by energy and maritime services company DNV GL AS published in January. 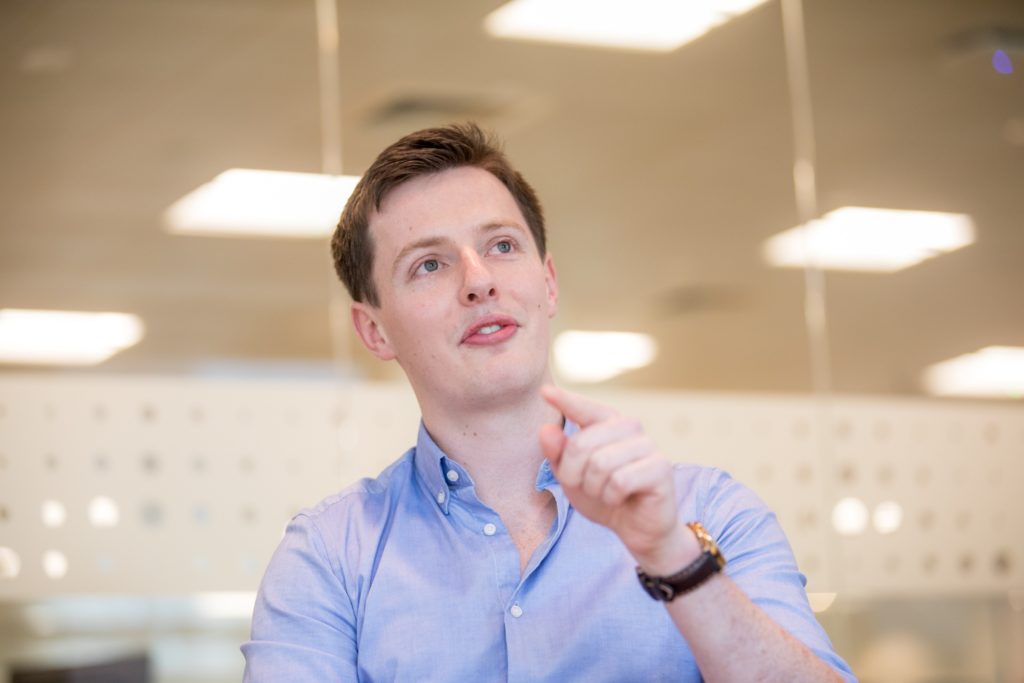 “Many engineers are drawn to jobs in ‘greener’ energy industries, while data scientists—much sought-after following the industry’s increased focus on digitalization—are often drawn to technology firms and other digitally driven companies,” DNV said in the report.

About a year ago, BP took the unorthodox step of inviting a dozen 20-somethings to regular meetings with senior executives. Murray Auchincloss, chief financial officer of the upstream business, Helmut Schuster, head of human resources, and Gordon Birrell, in charge of carbon, have young mentors.

“I just couldn’t believe it. I was flabbergasted” when asked, said Tann, looking at Looney across a round table in the executive’s office. “I think you were very good at putting me at my ease and letting me speak openly. It was useful, otherwise I would still be panicking.”

There are other advantages of keeping up to date with fast-moving technology trends. Cutting-edge tech can save both cost and time. Earlier this year, BP said an algorithm developed by a fresh graduate in Houston helped locate an extra 1.4 billion barrels of oil in two different fields in the Gulf of Mexico. The company wants more of this.

The transformation has its challenges. Gigantic oil companies have been around for decades and have their set ways and processes. Some are built to avoid accidents that involve the highly volatile and flammable products they work with. Silicon Valley, on the other hand, is said to live by the mantra “move fast and break things.”

The fossil-fuel industry is at the “mid-range” in adopting new tech, David Womack, who directs oil and gas strategy at IBM, said at a London oil conference last month. The sluggishness, driven by safety fears, may frustrate young recruits.

There are also concerns about whether the industry can withstand the societal changes associated with climate change, something Tann said he considered deeply before joining BP.

“That was a criteria,” he said. “I wanted to work somewhere where people were very open and honest about the science of things and what needs to be done.”

A year in, Looney said the mentoring program has helped him, among other things, learn that BP’s employees mostly want tools to make their jobs easier and faster, more than “shiny, front-end” projects. He’s learned that data science geeks hone their skills through online competitions, or group programming events called hackathons.

BP intends to expand the program as part of a broader push to “modernize” and transform the company.

“Unless we change some of these things, I don’t think we will be able to keep people like Connor,” Looney said. “He trusted us to join us and I don’t take that for granted, especially in today’s world. He can do all sorts of things.”